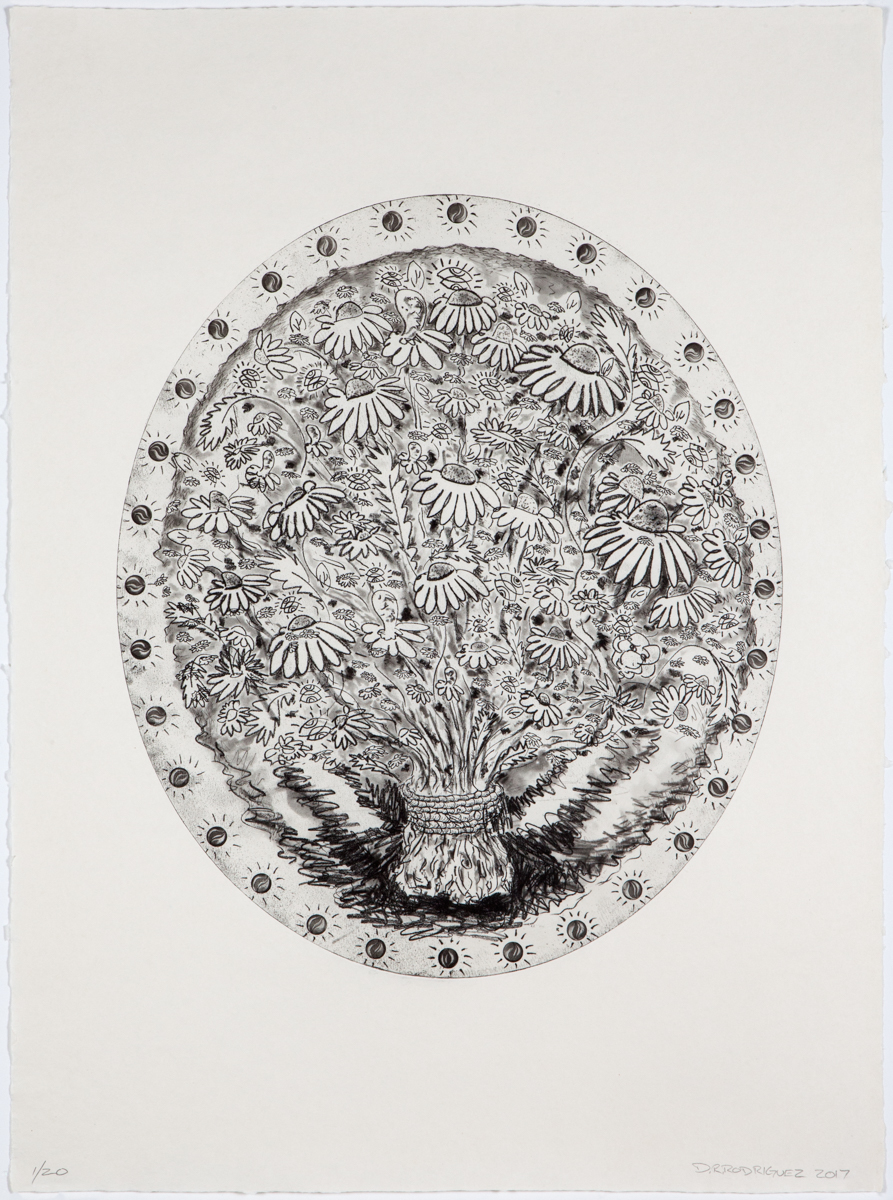 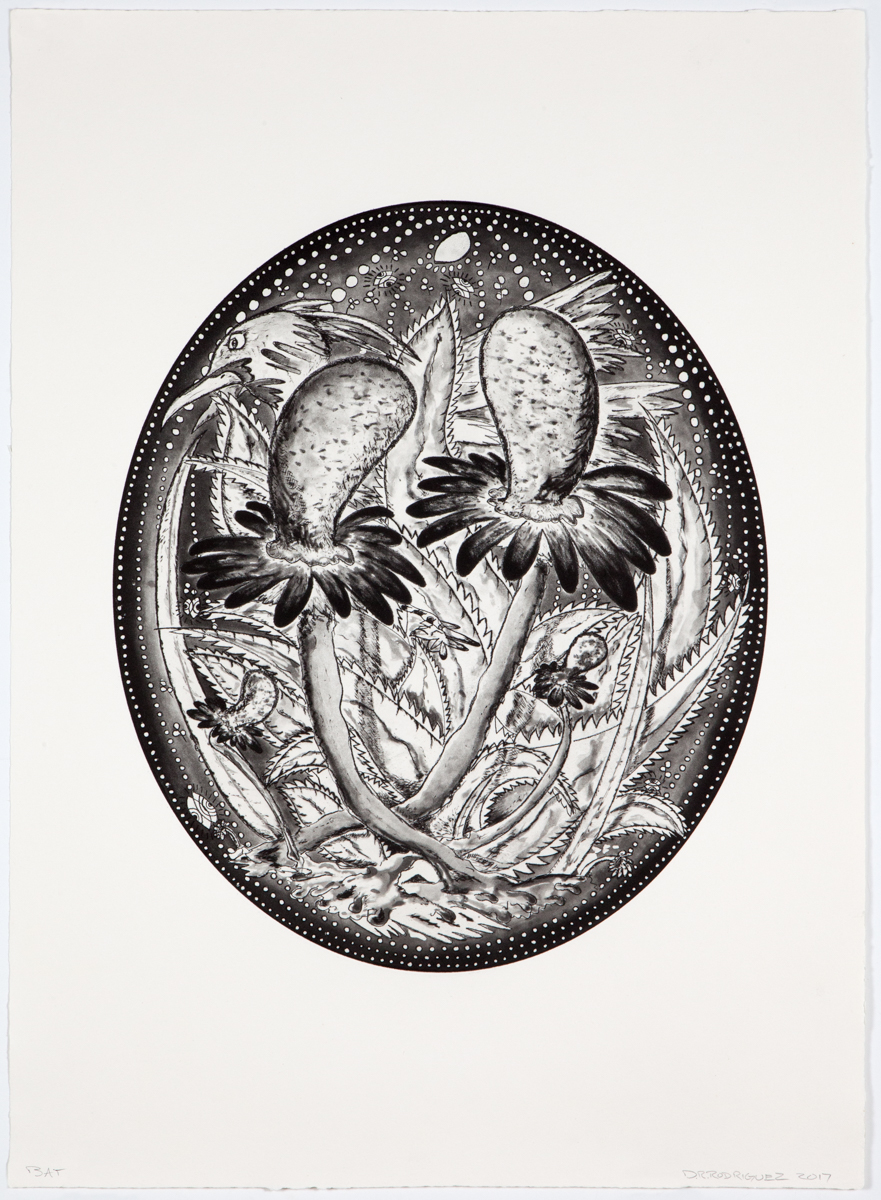 For me personally it’s hard to separate the land and farm from my time in the studio. I wanted to be in both places equally and what I loved about working with Peter and James is that that was inherently part of the process. Wingate has a rhythm of its own that isn’t imposing and rather brings you into the fold.

Wingate first discovered Daniel’s work through Chris Sharp of Lulu, an independent project space in Mexico City that had a booth next to ours at NADA Miami in 2015. Chris showed us Daniel’s beautifully sculpted painting shrines and pencil and black ink wash drawings. Daniel’s fast, intuitive, and responsive drawing process would prove to be a perfect match for Wingate Studio’s finely calibrated intaglio print shop.

We described to Daniel how we typically work: artists stay at Wingate for the duration of their project, usually 1-2 weeks. The studio is located on a functioning organic farm, and in the summer we enjoy cooking meals for artists with fresh vegetables, herbs, and eggs straight from the fields. Throughout the project the artist works closely with our master printers to develop an image–the artist directs the project and the printers facilitate them through the different processes. Many artists have never made a print before coming to work with us, though Daniel came with some prior knowledge:

I knew just a bit about printmaking. But it was my first time working on an edition. To be honest it was a longtime goal to have such an opportunity and it really couldn’t have gone any better from my perspective.

Daniel and his partner Ash visited in the middle of the summer when the doors and windows of the studio are always open and the fragrance of flowers mixes with the smell of the inks. Daniel showed up with his book of notes, symbols and source material. This allowed him to maintain a stylistic grounding in his tropes and references while at the same time being responsive to the etching process and to the place itself. His images and concepts grew and changed based on the process and his full experience of the place:

My drawings function so differently than my paintings and I didn’t really show up with any preformed ideas. Being able to work on specially cut copper plates was probably the most successful way for me to bridge the two and that it could be done at the studio was perfect. Once I had those jagged and oval plates I felt things come together pretty quickly.

As soon as we started working everything flowed. Daniel decided to focus on black and white single plate etchings so he could delve into the process and really flesh out the images. He worked on his six different etchings in cycles. While James and Peter proofed (inked and printed) one plate, Daniel worked on another, and a rhythm was quickly established of working on a plate, seeing the results of proofing, and responding. Daniel tried all the processes we have available, and then some: he painted onto the plates with acid to create a painterly effect (spit bite), he scratched into the plates with tools (dry point), he coated the plates with soft and hard grounds which allowed him to achieve direct lines with different qualities, he painted onto the plates with sugar lift solution, and he was able to achieve a deep velvety black unlike anything we’d ever seen by grinding into the plates with an electric engraver.

Sometimes Daniel and Ash ducked out of the studio for a bike ride to blow off some steam and explore old graveyards and the other farms nearby. Other times required a whiskey, a cigarette, and changing up the music to suit the mood. And there were the hot summer evenings when we finished early enough to go for a dip in the granite-lined lake up the road. James, Wingate Studio co-director, remembers:

It felt like Daniel was in his element, he wanted to experience the fullness of everything. He was working in the studio, then he’d go outside and experience the flora and the animals on the farm, then come back and incorporate. There’s a zen quality to his process, not forcing anything but manufacturing an experience.

On the last day of Daniel’s project we had some time to play, a rare gift. Daniel used the time to make monoprints. For each of the seven monoprints, he painted with colorful inks on the press bed within the bounds of the original black and white etching. We then ran the paper through the press picking up the color first, followed by the black plate. This process of monoprinting allows the color to come through the black etching rather than colorful ink being applied on top of the image.

As a fine-tuned etching studio, Wingate was able to offer Daniel something we’re really good at: the full range of what’s possible within the technical elements of copper plate etching. This project was seamless and joyful. Since making prints at Wingate, Daniel has said,

Printmaking is such a different animal than painting is for me and I think it opened up some rooms for layering and being more methodical. On the other hand some of the other prints I made using sugar lift were so direct that the performance of it required a kind of focus that I long for and have returned to a couple of times on other prints I have made.

We look back with nostalgia on the easy flow, focused studio time, and openness that Daniel brought to Wingate.