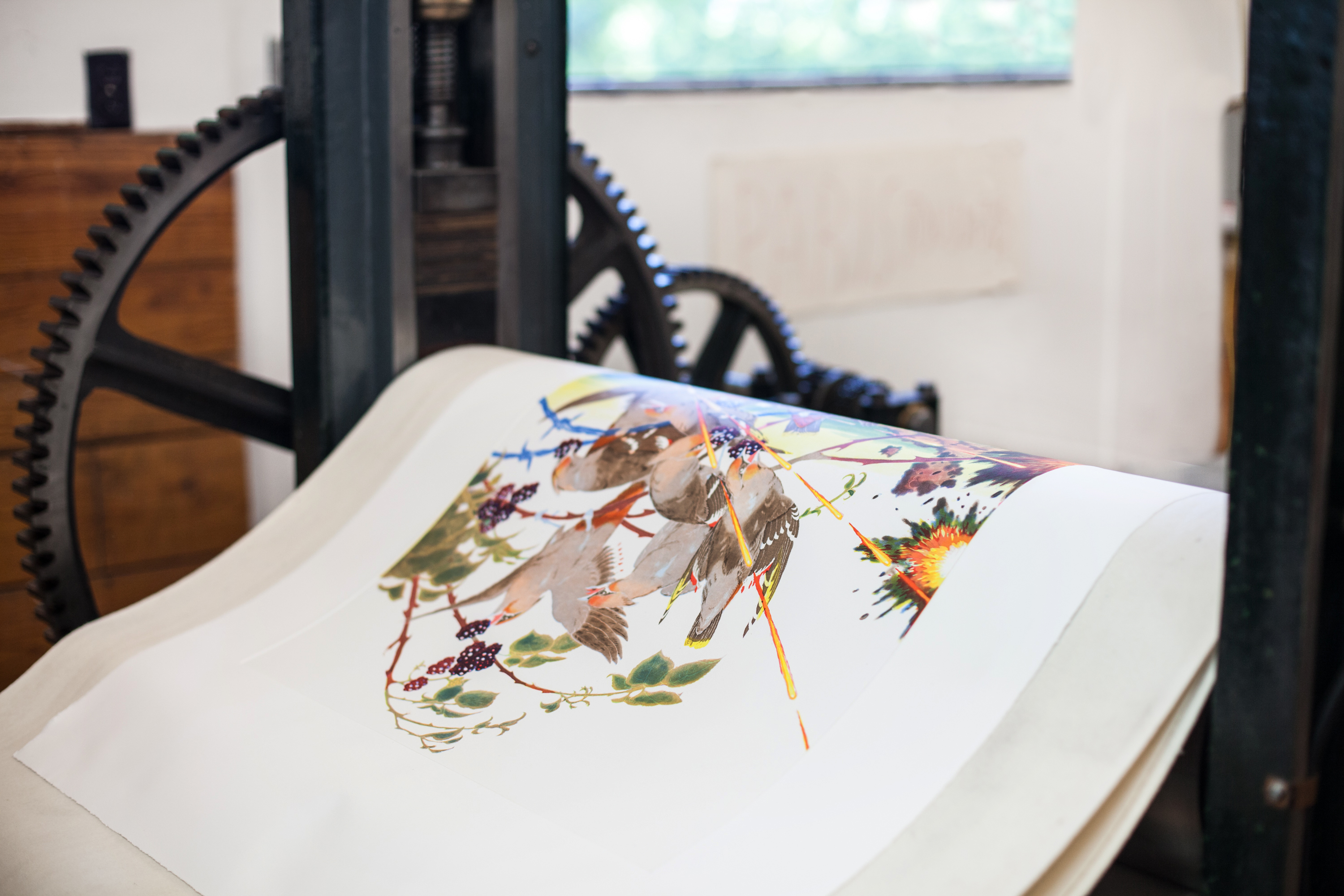 Wingate Studio publishes fine art etchings created by invited artists in collaboration with our master printers. The press advances the work of artists by presenting their work to the public through gallery shows, hosting museum and student groups, lectures, open studios, and by placing work in important public and private collections internationally.

Peter Pettengill started Wingate Studio in 1985 as a small print workshop on his family farm after having worked as a printer at Crown Point Press for seven years. Since then, our programming has expanded to include our own publishing program, workshops, lectures, apprenticeships and open studios. Our work can be found in the permanent collections of Baltimore Museum of Art, Cleveland Museum of Art, Library of Congress, Minneapolis Institute of Art, Museum of Modern Art, Whitney Museum of American Art, and many other public and private collections internationally.

The studio remains in its original location, but has expanded physically to accommodate projects at varying scales. The studio added a second press to its original hand-pulled French Tool–a large motorized Le Deuil that travelled from master printer Aldo Crommelynck’s studio in Paris, France.

While the world has been drastically altered by technology since our inception, our mode of production has remained much the same. Artists still scratch into copper plates with tools, and paint onto plates with solutions made of sugar, asphalt, and soap in the same way artists did in the 1600’s. And our printers still ink up the plates, wipe them, and print them by hand. We are always excited to see what contemporary artists bring to this timeless process.

Wingate Studio invites artists to collaborate on projects in a peaceful setting, provides a private artist’s apartment, and cooks freshly prepared meals with ingredients from the farm. Meals are often outside under the big maple tree next to the studio overlooking the farm fields. Artists work with our master printers to produce original artworks in the form of limited edition etchings. Artists direct the projects while our master printers enable and facilitate. Learn more about our process here.

The studio occupies a classic New England barn located on a 55-acre farm three and a half hours north of New York City. Wingate Studio is open to visitors, museum groups, and schools by appointment, and we encourage you to visit. We are on the border of Massachusetts in southern New Hampshire, making a beautiful day trip from the greater Boston and New York areas.

Wingate Studio first opened in 1985 as a print workshop where founder Peter Pettengill printed work for Louise Bourgeois, Walton Ford, Sol LeWitt, Robert Motherwell, and other artists. Wingate Studio began publishing its own prints in the mid ’90s by New England-based artists, and has since expanded its publishing program to include artists of international acclaim, including Ambreen Butt, Walton Ford, Josephine Halvorson, Robert Kushner, Barbara Takenaga, and many others. Wingate Studio continues to work in both modalities, both printing editions for other publishers and galleries, and publishing its own prints in collaboration with contemporary artists. The press is renowned for its specialization and technical expertise in the age-old process of multiple plate aquatint etching.

In 2013 Peter’s son James Pettengill joined as a second master printer, after having grown up in the print studio, moving away and starting a gallery in Philadelphia, and returning to the place he loves. James continues to print, and now co-directs the publishing program with Peter. Alyssa Robb also joined in 2013 as the director of communications and visuals.

The studio was once Peter’s grandfather’s portrait photography studio, and the land has been farmed for four generations. Wingate has supported both farming and artistic process for over 100 years.