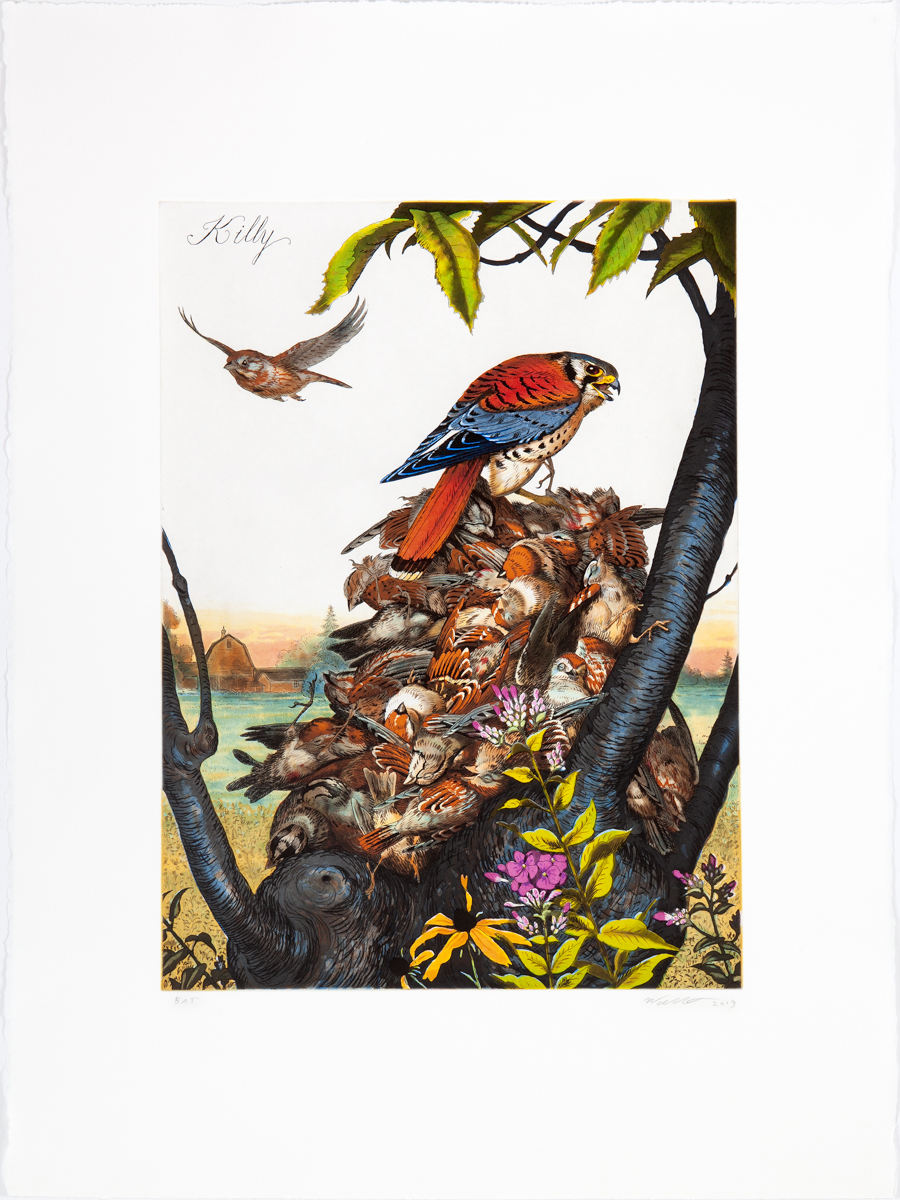 The American Kestrel was formerly known throughout the United States as the Sparrow Hawk. The kestrel feeds on other birds, mice, reptiles, and insects. In 1895, Frank M. Chapman wrote in his Handbook of Birds of Eastern North America: “The Sparrow Hawk’s call is a rather high, quickly repeated killy-killy-killy-killy, which in some sections gives it the name of ‘Killy Hawk’.” (p.211)

Ford recalls a kestrel that would roost on the clothesline tower outside of his Brooklyn apartment window many years ago, and every afternoon the bird would eat an English sparrow. He noted, “I’m pretty sure that this was the bird’s only meal; that the hunt took very little effort; and that the rest of the bird’s day would be spent resting, or quietly soaring around the neighborhood. In creating this print, I got to thinking what it would be like if a sparrow hawk had the kind of greed and attachment to material things that humans have.”

Wingate Studio and Walton Ford have been working together for over 20 years. Killy, 2019, is the 14th collaborative print between the artist and Wingate Studio. 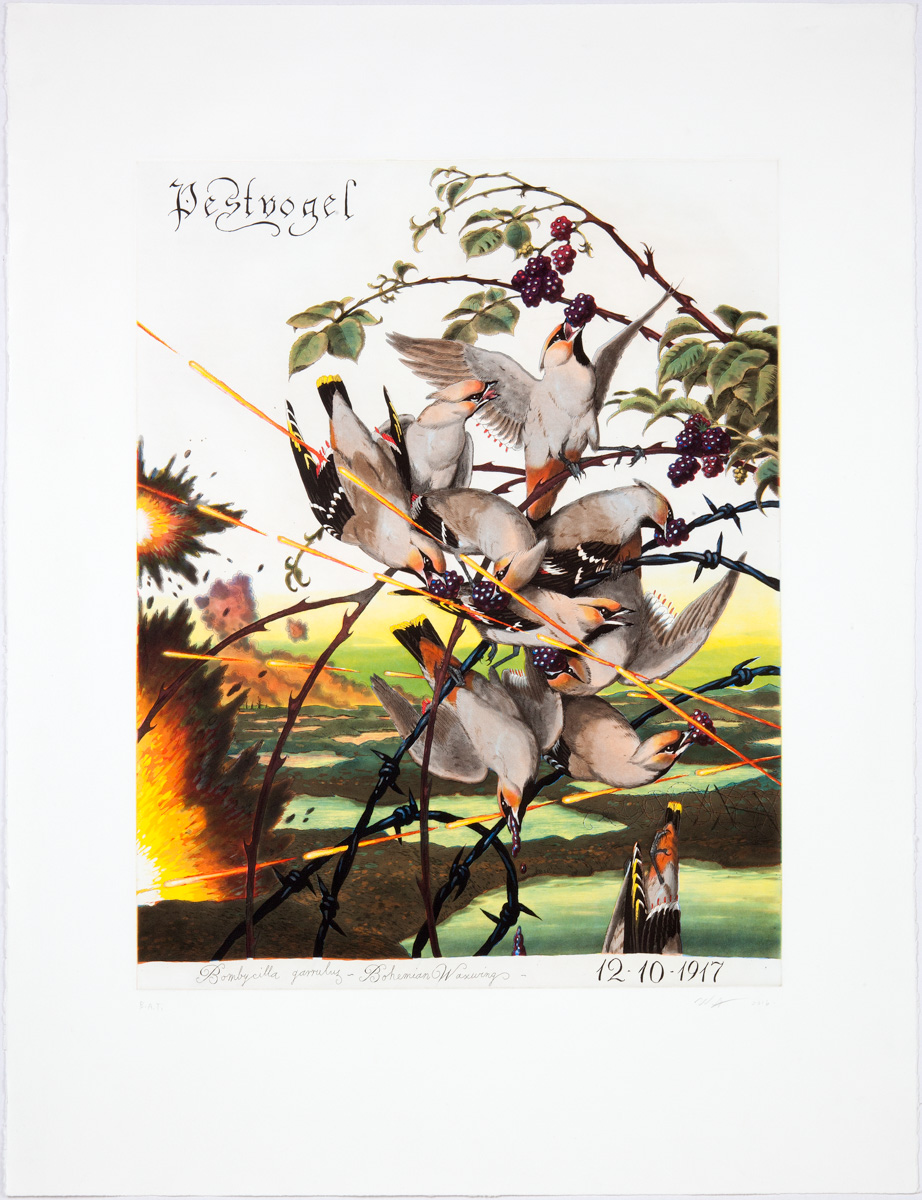 Pestvogel is the 13th collaborative print between artist Walton Ford and Wingate Studio.

The print depicts a small flock of Bohemian waxwings gorging on blackberries as a battle rages in the background. Waxwings are fruit-eating Eurasian perching birds. “Periodically waxwings break out from their boreal confines and undertake massive, sometimes continent- wide migrations…Such was the impact of these sudden, inexplicable arrivals that Bohemian Waxwings were once loaded with sinister import…Old names for the species included Pestvogel (‘plague-bird’) which is still the bird’s name in Dutch, as well as unglückvogel, pestilenzvogel, and todtenvogel in German-speaking areas (respectively, ‘disaster-bird’, ‘pestilence-bird’ and ‘death bird’). A widely recorded waxwing invasion during the winter of 1913/14 was later assumed to be a foreboding omen for the calamity that ensued the following summer – the First World War” (Cocker, Mark. Birds and People. London: Jonathan Cape, 2013, p 407).

Such violent and bizarre moments at the intersection of human culture and the natural world are the subject of much of Ford’s work. To quote the artist, “In this print I imagined what
kind of imagery could accompany this fantastic belief, the idea that a small songbird could be responsible for a world war. Some of my work is a literal exploration in these kinds of fears and superstitions.”

Wingate Studio is based in the Connecticut River Valley, and under directors Peter Pettengill, James Pettengill, and Alyssa Robb, the Studio produces and publishes printed editions, books, and special projects with contemporary artists. Peter Pettengill and Walton Ford have been working together for nearly 20 years. 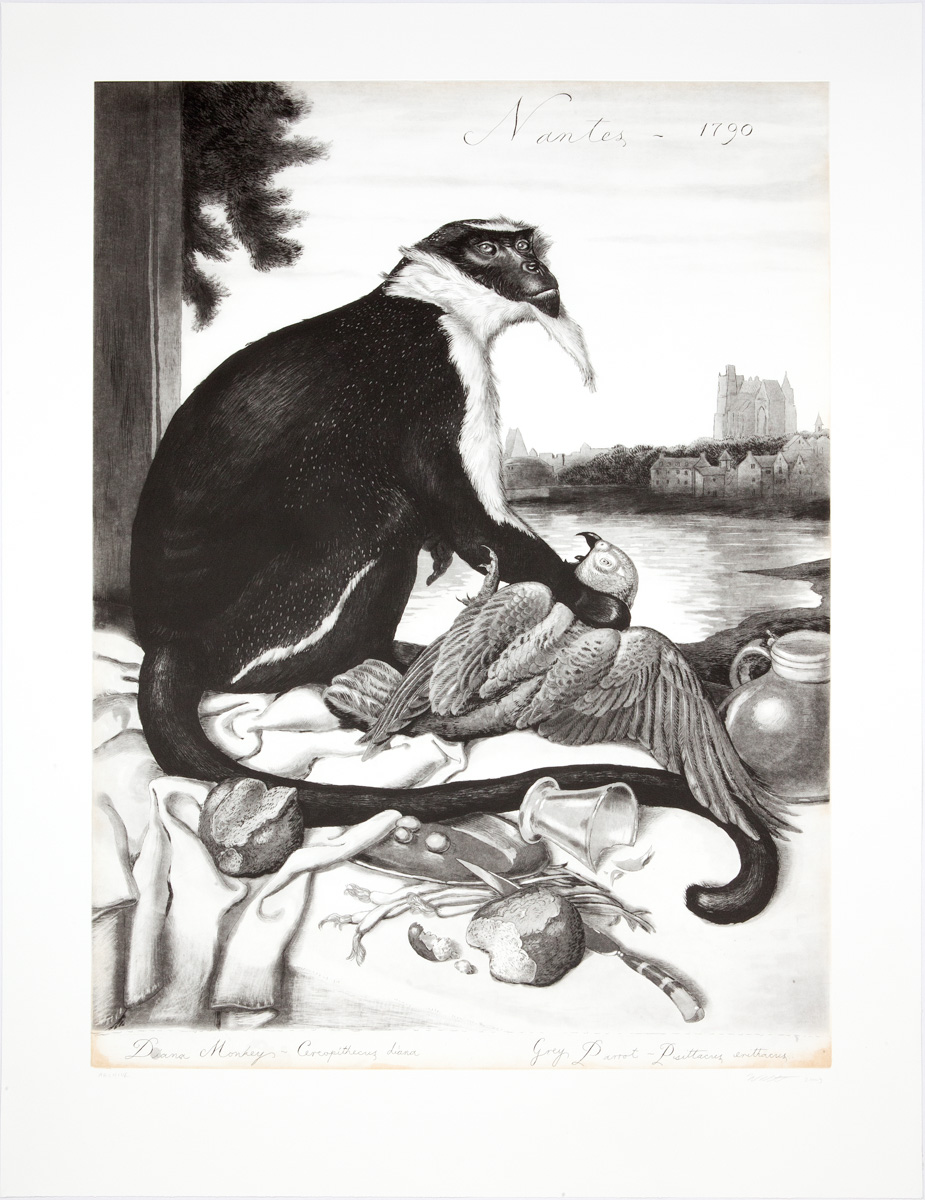 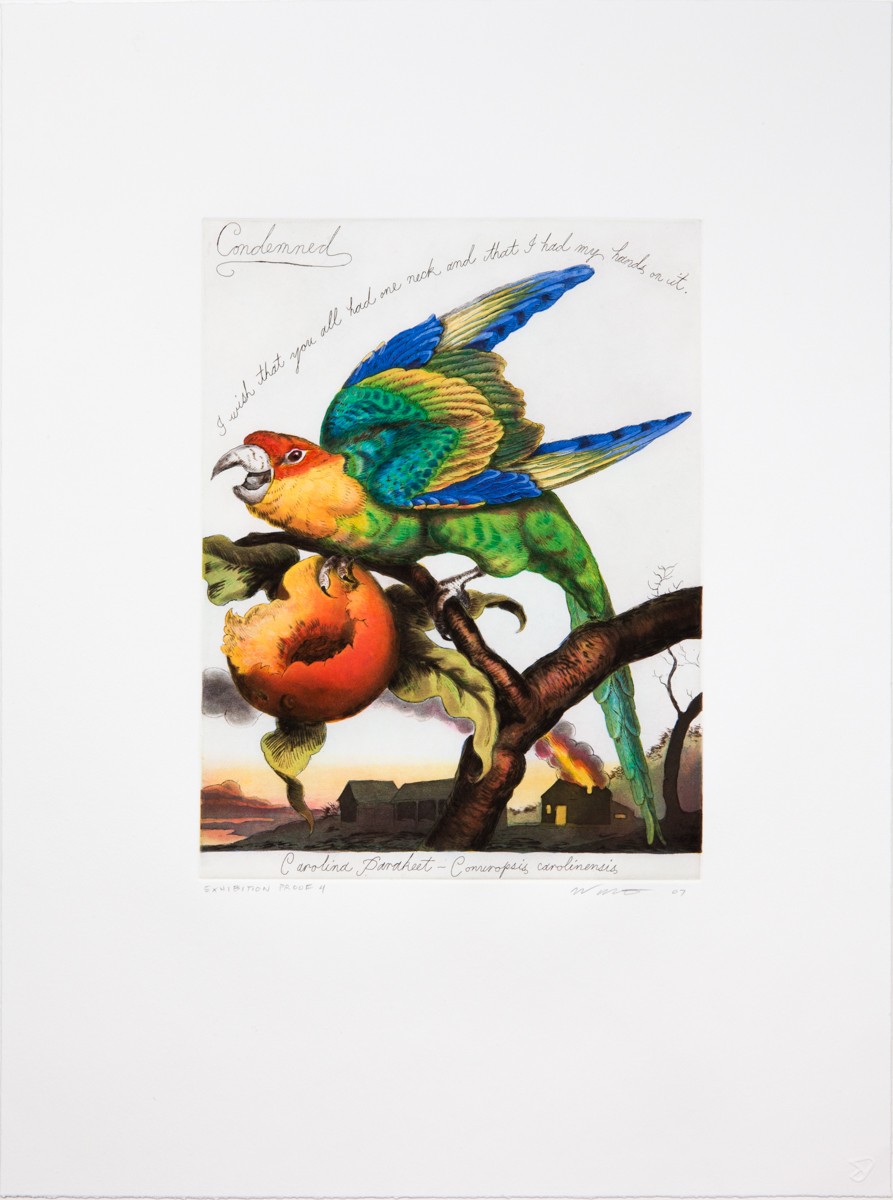 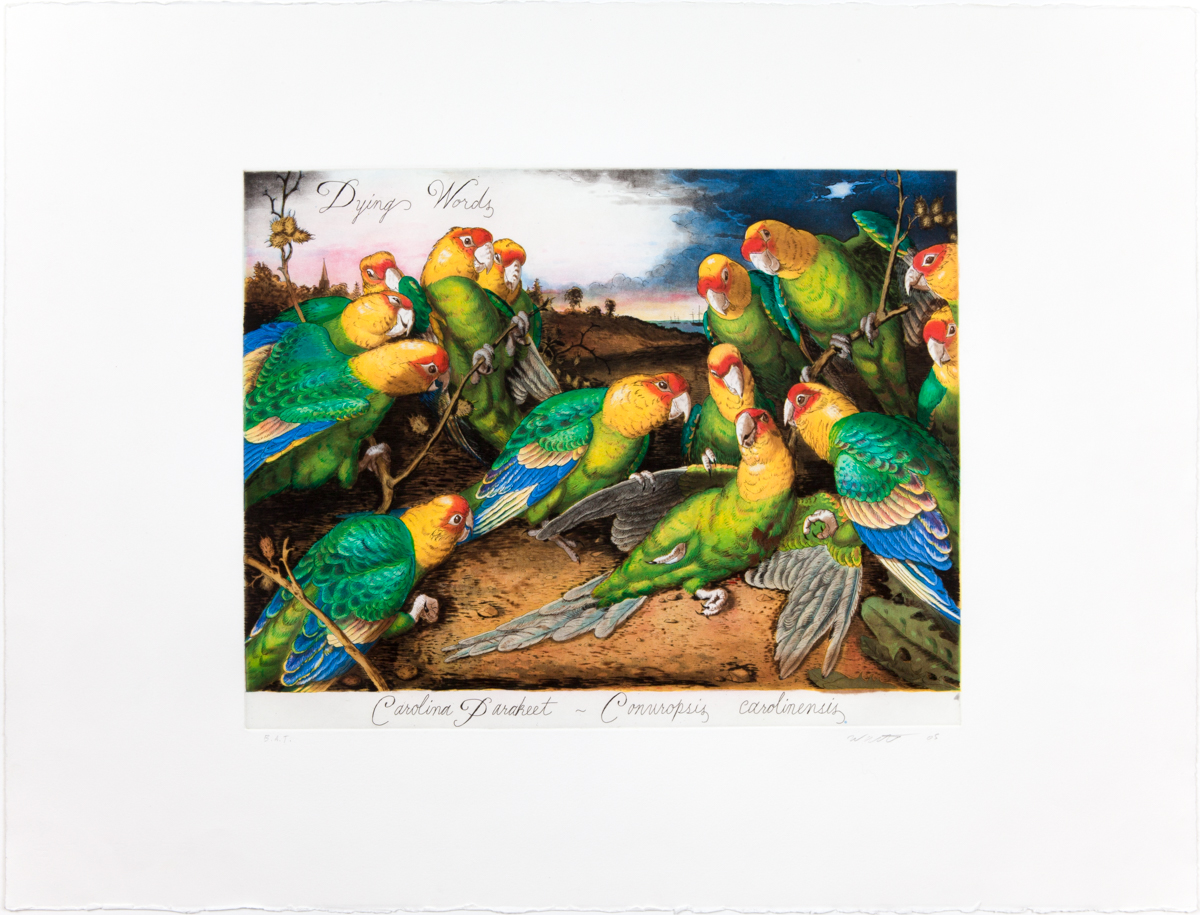 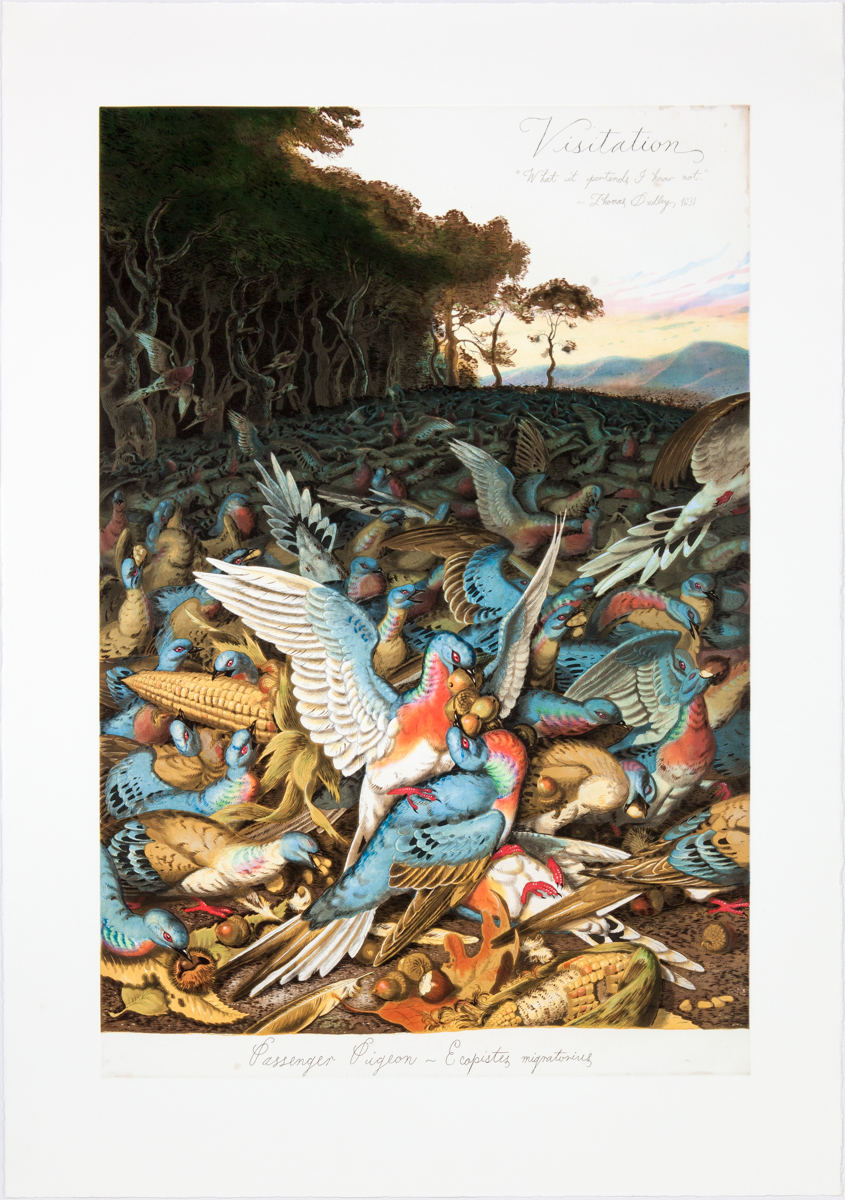 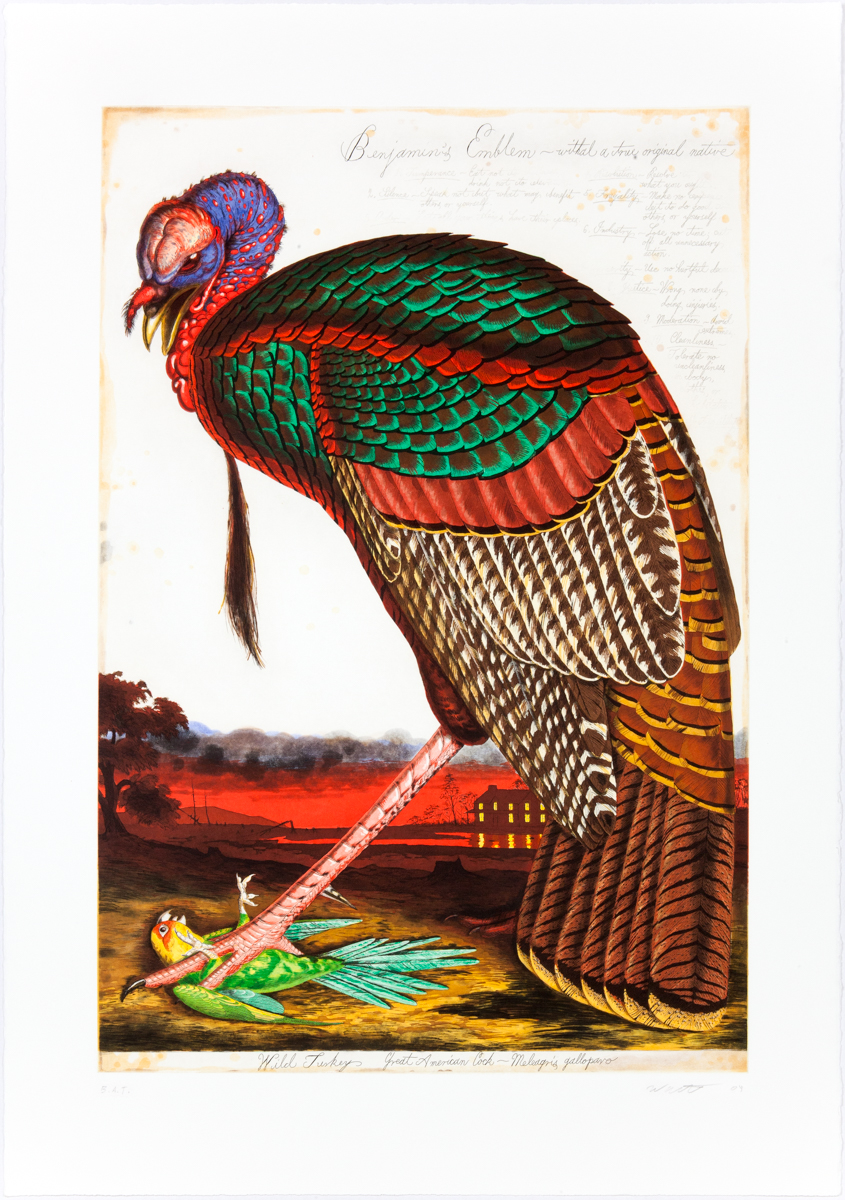 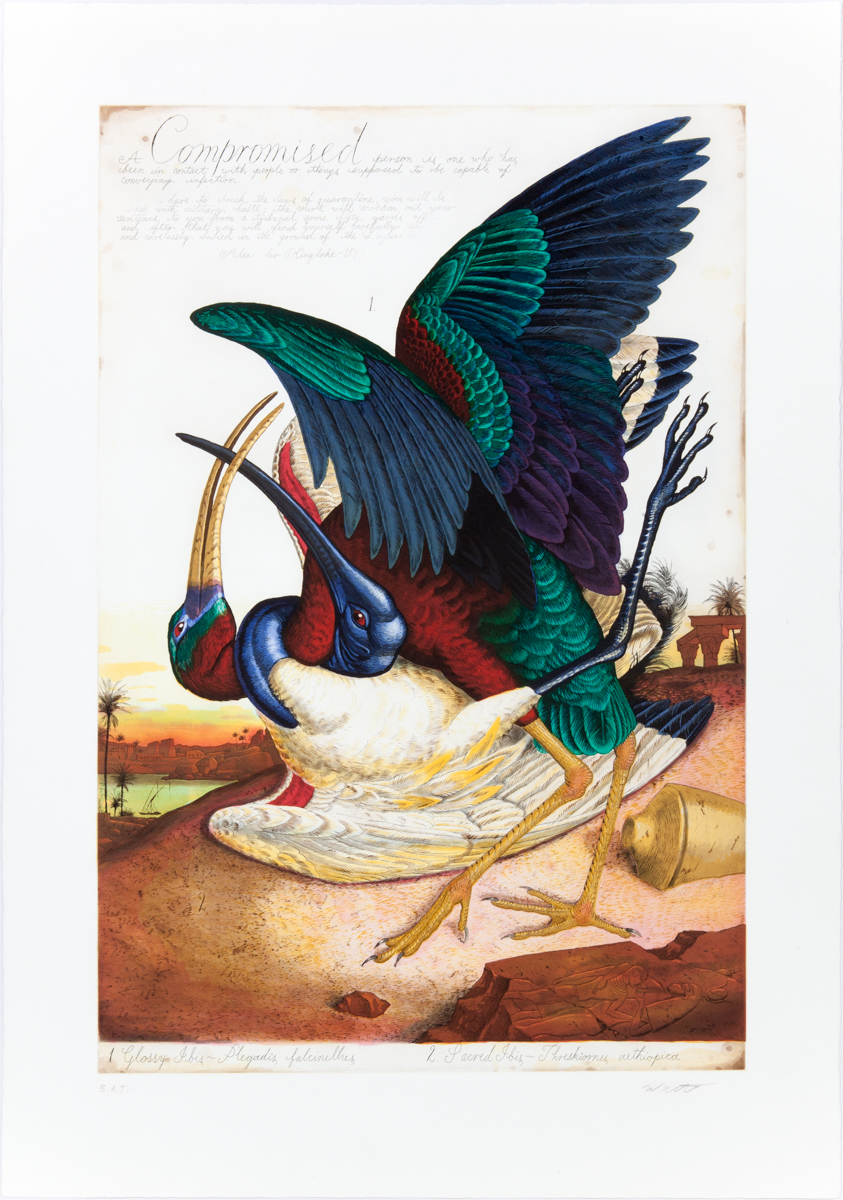 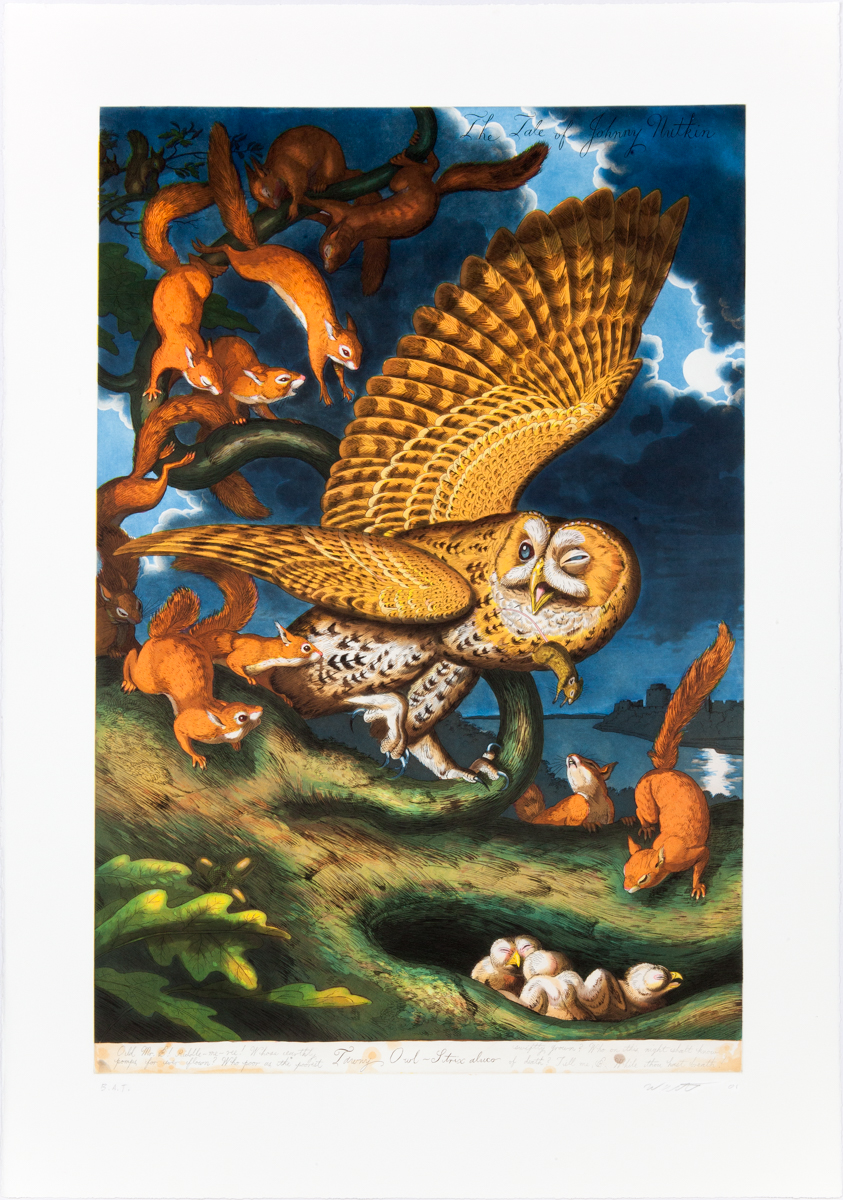 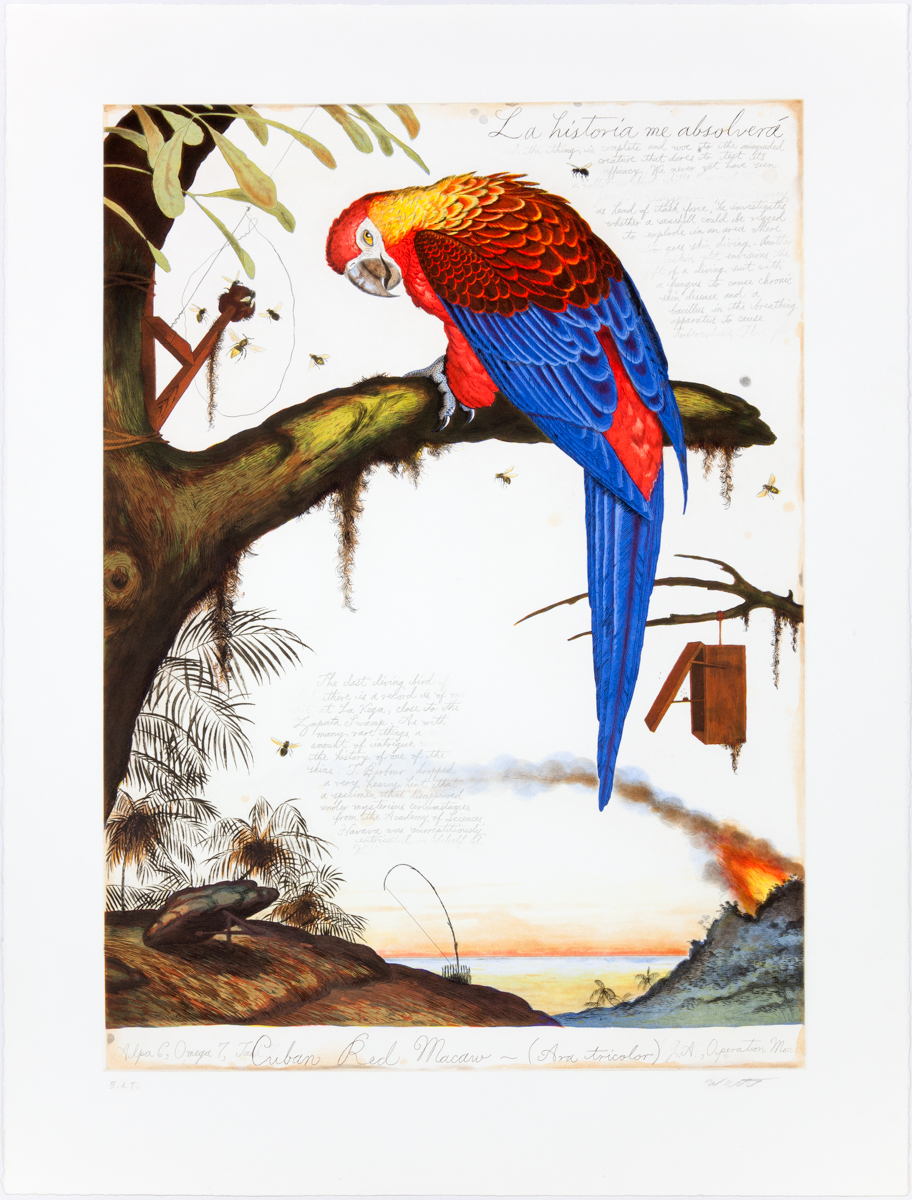 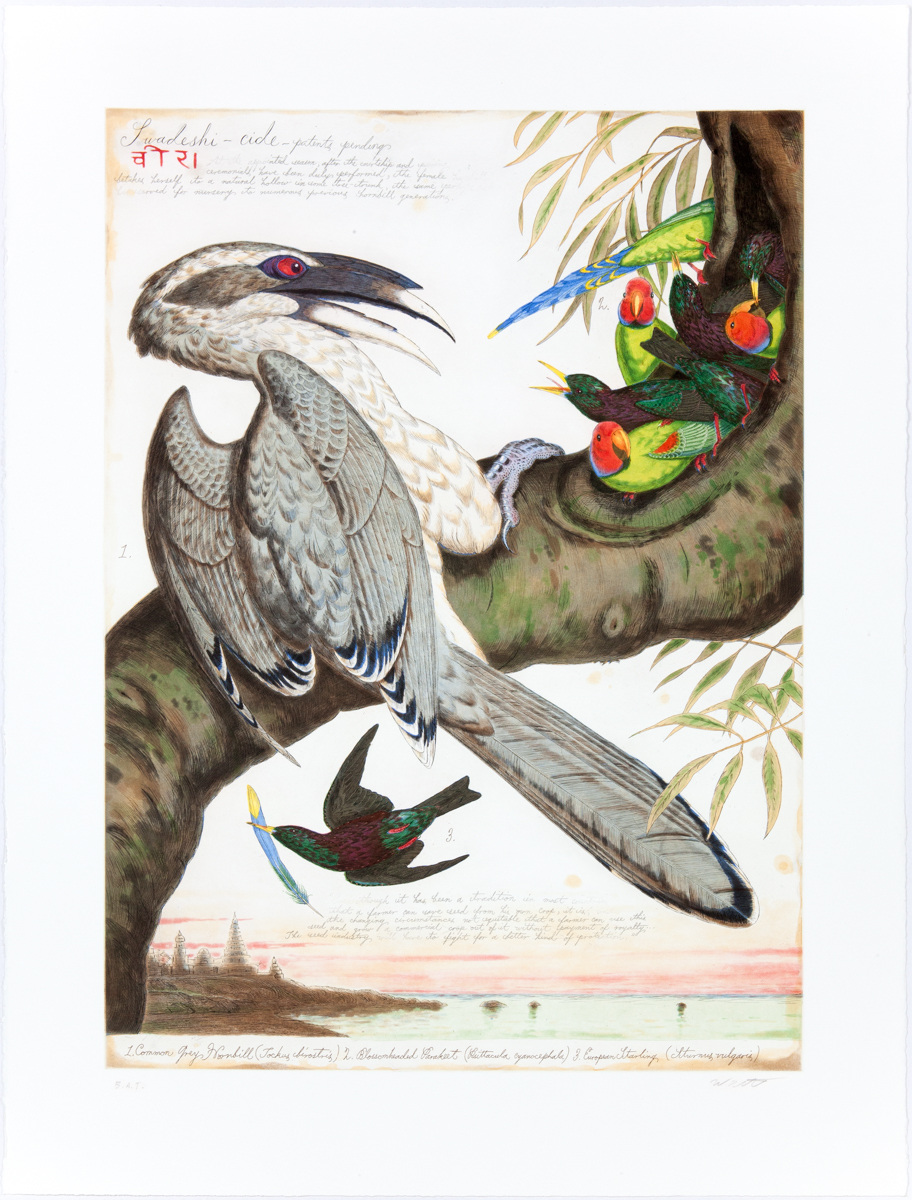 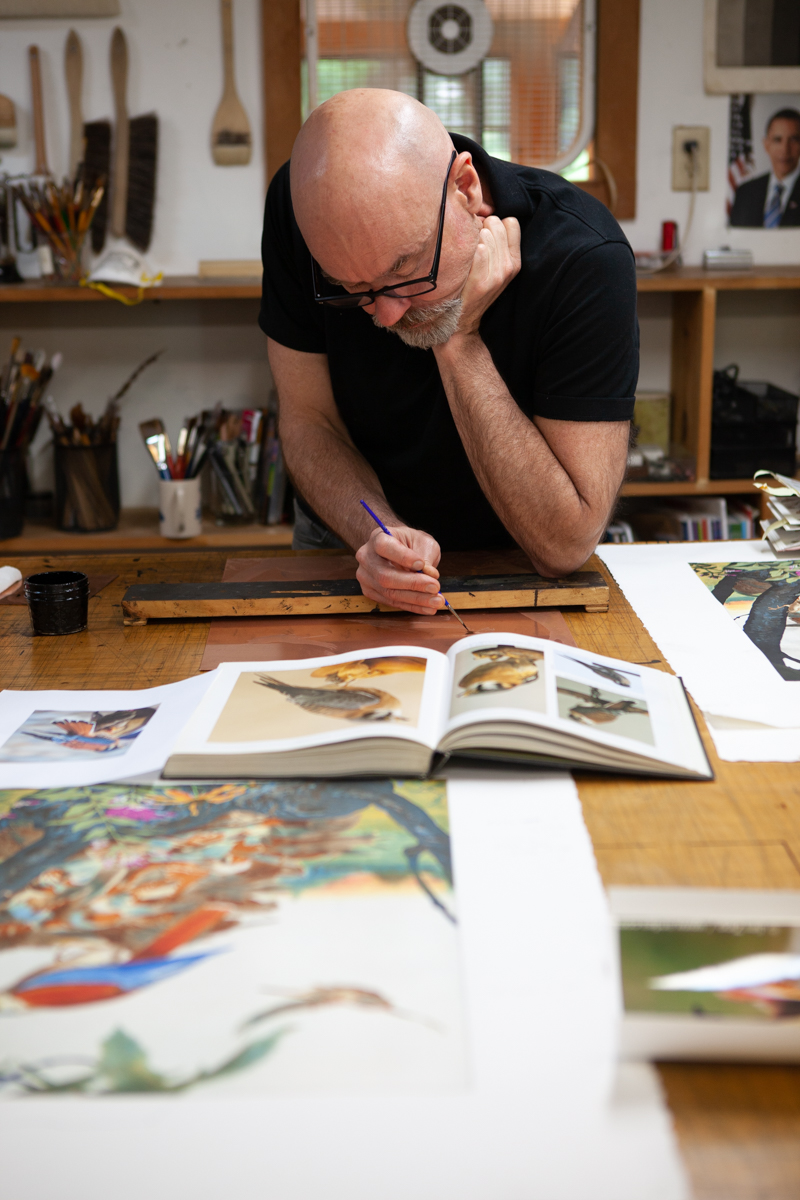 Walton Ford lives and works in New York, NY, and his work is included in a number of private and public collections, including the Minneapolis Institute of Art, Smithsonian American Art Museum, Whitney Museum of American Art, and many others. Ford’s midcareer retrospective traveled from the Hamburger Bahnhof Museum Fur Gegenwart (Berlin), to the Albertina (Vienna) and to the Louisiana Museum of Modern Art (Denmark) in 2010-11. Ford was recently the subject of a solo exhibitions at Gagosian Gallery (Los Angeles, CA) and the Musée de la Chasse (Paris). Taschen has issued three editions of his large-format monograph, Pancha Tantra.