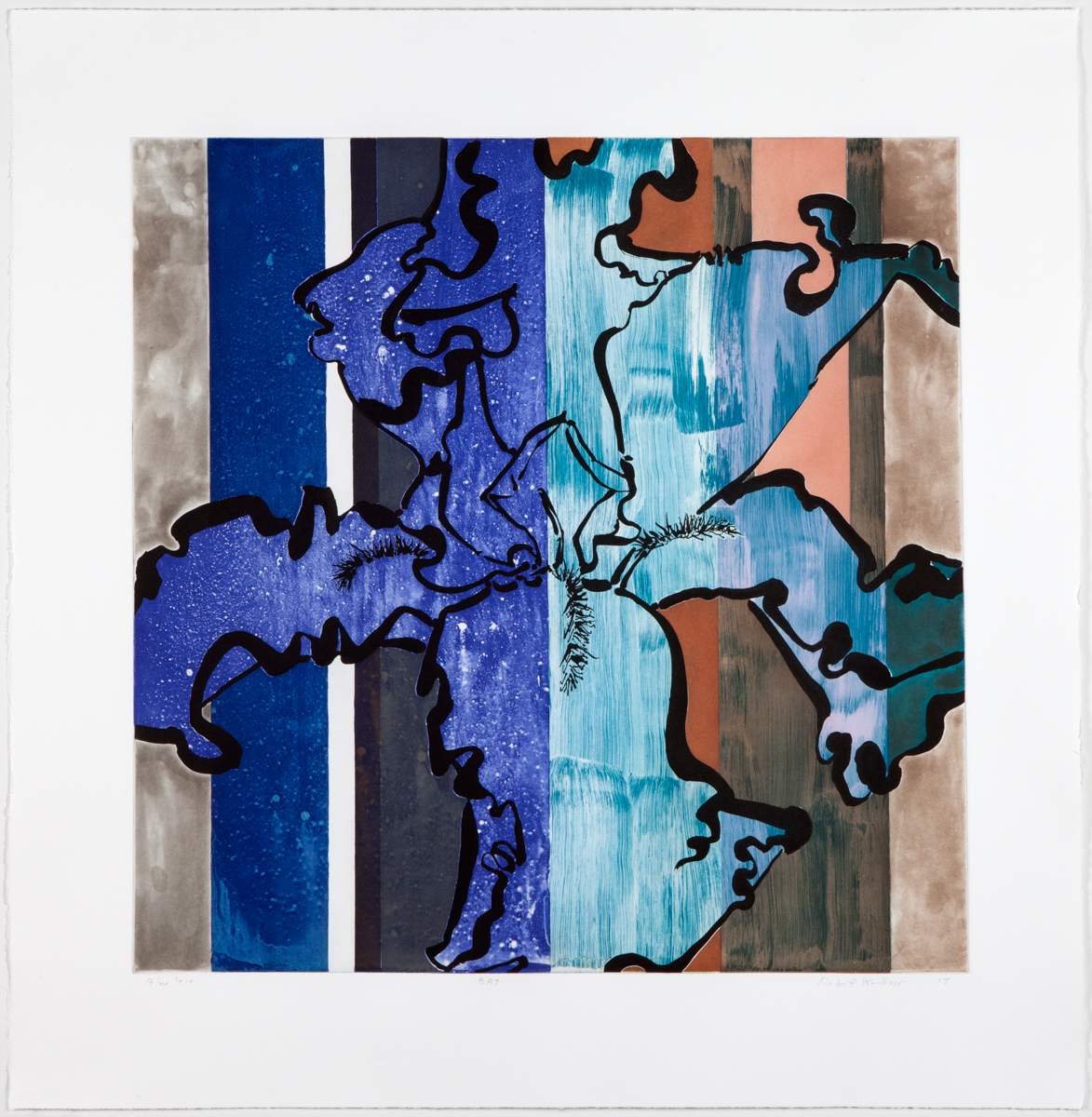 Download Press Release
Inquire
Wingate Studio is pleased to announce a new etching in collaboration with Robert Kushner created during the summer of 2017. Blue Iris is an embodiment of Kushner’s gestural floral forms and vertical stripes in striking colors, patterns and textures. The five plates inked in cobalt, bleu concentre, turquoise, raw umber, and burnt sienna overlap to form a total of fourteen colors. The artist used soap ground and spit bite to describe cosmic-like explosions juxtaposed with grainy vertical brush marks and soft washes. Colors and textures spill beyond the bounds of their forms, blurring the distinction between figure and ground. Kushner is a veteran printmaker and has an ease and knowledge of etching that is evident in this print.

Known for his pioneering involvement in the Pattern and Decoration movement of the 1970’s and ’80’s, Kushner continues to address controversial issues in decoration in a variety of media. Like the work of contemporaries Betty Woodman, Joyce Kozloff and others, his compositions evidence a response to the austere lines and restrained forms of minimalism. At the same time, Kushner incorporates the flattening description of space and objects endemic to that movement. The artist’s early performance works of the 1970’s featured patterned fabric that was ornately collaged and painted. His work in painting, sculpture, collage, print, and mosaic is characterized by colorful abstraction and botanical motifs that draw from non-western decorative arts including Japanese folding screens, Chinese and Japanese sumi ink drawings, and textiles. Robert Kushner (b. 1949) has exhibited extensively in the United States, Europe, and Japan. Hudson Hill Press has published a monograph on his more than three decades of work entitled Gardens of Earthly Delights. Solo exhibitions of his work have been held at the Whitney Museum of American Art (New York, NY), and the Brooklyn Museum (Brooklyn, NY), and the Institute of Contemporary Art (Philadelphia, PA). His work is held in public collections such as the Museum of Modern Art, Metropolitan Museum of Art, and Whitney Museum of American Art, (New Yor, NY), National Gallery of Art (Washington, DC), Philadelphia Museum of Art (Philadelphia, PA) San Francisco Museum of Modern Art (San Fracisco, CA), Tate Modern (London, England), and the Galleria degli Uffizi (Florence, Italy). The artist lives and works in New York City, and is represented by D.C. Moore Gallery.